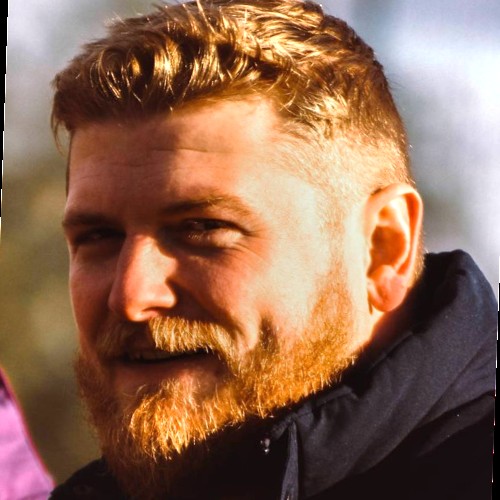 Jonathan Rooney is a highly experienced American Football coach and educator with over 15 years’ university coaching experience. A passionate New York Giants fan, Jonathan is a former GB Students player and GB U19 coach, and has been involved in Britball in for over 30 seasons in various capacities.

Jonathan’s professional background is in education, and he worked as a mathematics teacher whilst developing and honing his skills as a football coach in universities on a part-time basis. In 2011 he spent a year coaching in the United States, working with teams at High School, Collegiate and Professional level including Concord High School, NC, Mississippi State University, MS and Cleveland Gladiators, OH.

In 2018 Jonathan took on a full-time role at Durham University, combining the role of Head Coach of the Durham Saints with broader student engagement and community outreach work for the University, and leading the team to victory in the 2018 National Championship.

Jonathan is active as an educator of coaches, working as a National Coach Educator for the British American Football Coaching Association. He also sits as Chairman of the Sports Advisory Group for British Universities & Colleges Sport (BUCS), advising further and higher education institutions to build the profile of the game.

Jonathan has lived and breathed UK American Football from an early age, and has made an outstanding contribution to the sport as a player, coach, educator and advocate. In his role as Director of Football Operations at UKFL, he’s committed to developing the UK game to open up new opportunities for home-grown talent to build a career in the sport.

Excited about UKFL?
Here's how you can help us build something amazing:

Invest in UKFL and help us build a platform for exceptional American Football in the UK.
INVESTOR INFORMATION

Want to help us build UKFL? Contact us to find out how you could get involved.
CONTACT US

We use cookies on our website to give you the most relevant experience by remembering your preferences and repeat visits. By clicking “Accept”, you consent to the use of ALL the cookies.
Cookie settingsACCEPT
Manage consent

This website uses cookies to improve your experience while you navigate through the website. Out of these, the cookies that are categorized as necessary are stored on your browser as they are essential for the working of basic functionalities of the website. We also use third-party cookies that help us analyze and understand how you use this website. These cookies will be stored in your browser only with your consent. You also have the option to opt-out of these cookies. But opting out of some of these cookies may affect your browsing experience.
Necessary Always Enabled
Necessary cookies are absolutely essential for the website to function properly. These cookies ensure basic functionalities and security features of the website, anonymously.
Functional
Functional cookies help to perform certain functionalities like sharing the content of the website on social media platforms, collect feedbacks, and other third-party features.
Performance
Performance cookies are used to understand and analyze the key performance indexes of the website which helps in delivering a better user experience for the visitors.
Analytics
Analytical cookies are used to understand how visitors interact with the website. These cookies help provide information on metrics the number of visitors, bounce rate, traffic source, etc.
Advertisement
Advertisement cookies are used to provide visitors with relevant ads and marketing campaigns. These cookies track visitors across websites and collect information to provide customized ads.
Others
Other uncategorized cookies are those that are being analyzed and have not been classified into a category as yet.
SAVE & ACCEPT